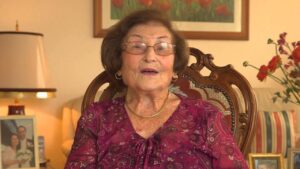 Flore Jaku was a gifted and accomplished woman, beloved of her family and friends, who delighted in literature and the arts, who worked with he husband Eddie to build a life and a family in a new country. She was more quiet and receding than her husband, but she was a powerhouse of activity and achievement. At the hardest times she was stoic and uncomplaining, with a great sense of humour, and her passing leaves a huge hole in many lives.

Flore was born in Salonica on 28 September 1923 to Ovadia and Fortunee. The family left Salonica when Flore was a little girl and settled in Brussels. Her first language was Ladino, Judaeo-Spanish, but she knew and remembered no Greek until she took a Tafe course in her eighties, when she came top of the class.

In Brussels her academic achievements were outstanding and she developed her love of poetry, including reciting it in public to much acclaim. The Germans invaded Brussels when Flore was 16 and she was spirited away to Paris when she managed to live more or less openly for the duration of the War. Her father passed away of natural causes and that time and her mother, for some reason, was never arrested, but kept working in her haberdashery. Flore saw the Liberation and returned to Brussels where she returned to her work in a local government office.

She was handing out food ration coupons to the people they called ‘the prisoners’, the Holocaust survivors, when a young man called Eddie asked her to come with him to Australia. She and her friends thought it was a crazy idea at first, but of course she and Eddie came to Australia, brought by the Joint, and Flore was giving up a lot, especially a very promising future, and came to live in Sydney.

Eddie and Flore married in 1946, then Michael was born. They arrived in Sydney in 1950 where Andre was born. Flore always worked, either with Eddie in joint ventures, whether a garage, a dealership or real estate, or she worked from home, taking in piece work – embroidery, alterations, repairs. She was computer literate early on, and even more recently she was the one who typed and sent the replies to the emails that Eddie received. Although Eddie was the Treasurer of the Association of Australian Jewish Holocaust Survivors, it was Flore who prepared the accounts.

Flore was capable at whatever she did, and she did a lot. At the garage she not only did the books and handled the finances, she would also pump the petrol and check the tires and oil. She and Eddie were a pair of hard workers, working long hours every day. Fortunee came to join the family and played a big role, and together they made a life: family meals together, then sitting round the radio, family holidays to Katoomba or Surfer’s Paradise.

Flore was a fantastic mother, loving and treating everyone the same. She was scrupulously honest fair and reliable. She expected those standards from her family. She doted on her grandchildren and great grandchildren as they came. She was a wonderful and supportive mother in law and friend. When Linda’s mother Adele became a widow in her forties Flore was a great support and they would go on trips to the theatre and even holidays together. Fortunee had remarried, to Ezekiel Saul, uncle Issy, and when her mother died, it was Flore above all who looked after her step father. That was her conception of loyalty and care.

In Sydney she was a big reader, she was involved with the theatre group, Pact, although when she first arrived it was not easy to find an outlet for her artistic and intellectual interests, something which was much easier in Belgium. To near the end of her life she wrote beautiful, long emails, full of humour. She and Eddie had moved into the Monte in 2019 primarily for her sake as she was becoming frail. She never complained, and even when the food had to be pureed and came as a brown blob, she would write to her family, ‘they gave me crocodile for lunch today’ or ‘they surprised me with buffalo this evening’.

She was married to a man with a huge presence, but he couldn’t have managed without her, from what tie he wore to co-running the businesses that kept the family secure. They were truly a first class team. After a very long marriage and a very brief widowhood, Flore is with Eddie, and her parents and sister, once more.

Flore passed away on Shabbat, which is always a sign of merit. We were about to read Parshat Korach, which tells us about Aaron’s staff, a piece of dead wood, which miraculous blossomed with almond flowers. Flore was a flower. She came from dislocation and displacement, she married a man who faced destruction, and she flowered. She cause a whole family to flower, she enabled her husband to flower. But she was always the most beautiful blossom of them all. May her memory be a blessing.