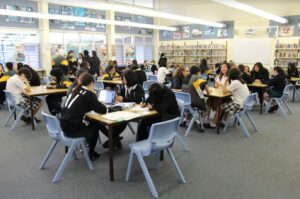 RANDWICK Girls High School will begin offering a Hebrew program from 2023 to meet a growing demand for the subject.

Principal Lucy Andre, who spent 10 years at Rose Bay Secondary College where she oversaw a strong Hebrew program, told The AJN there are current and prospective students who have signalled their interest.

“We already run a Jewish group and offer Jewish scripture, so we know there are students here wanting it,” Andre said.

“And we had a tour group with students from Mount Sinai and the parents were asking if we’re offering Hebrew. I rang Jo (Gluckman) about it straight away and now word is spreading that we’re looking at this.”

Jo Gluckman heads Jewish Life and Learning at the NSW Board of Jewish Education (BJE) and she said the demand for Hebrew at Randwick Girls reflects the shifting demographics of the Jewish community.

“The Jewish community on the north shore is shrinking drastically because immigration from South Africa that built that community has slowed down,” Gluckman said.

“Families are not moving into the eastern suburbs because it’s too expensive, so they’re moving to the south-east suburbs.

“We at BJE are seeing more Jewish students at schools across Marrickville, Matraville, Kensington, Randwick and Maroubra. That’s where families are starting to settle.

“Randwick Girls is becoming very popular for families graduating from Mount Sinai, where there is a very strong Hebrew program. For them to know that there’s an alternative and that Randwick Girls is offering Hebrew, that’s a huge drawcard and also a comfort.”

While there are financial reasons behind the growing interest in a public high school, there are also religious considerations.

History teacher Benny Kaplinski, who is Jewish, added, “From a religious point of view we have a situation where those students, particularly girls, come from religious homes and want to be in a single-sex school.”

Initial plans are to introduce Hebrew at year 7 and 8 levels.