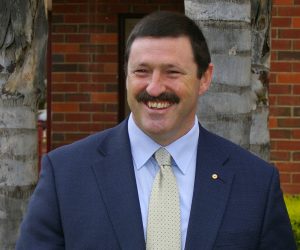 Dr Kelly, a steadfast friend of the Jewish community from within the Labor Party, resigned from politics earlier this year due to health complications developed during his 20-year service in the Australian Army. His career in the Army saw him deployed on operations in Somalia, Bosnia, East Timor, Iraq and a hostage recovery mission in Kenya.

Serving as a Member of Parliament from 2007 – 2013, and again from 2016 – 2020, Dr Kelly held several executive positions in the Rudd and Gillard Governments, including the Minster for Defence Materiel in 2013. Dr Kelly was appointed Assistant Shadow Minister for Defence Industry in his second term in parliament, sat on the Shadow National Security Committee and was a member of the Parliamentary Joint Committee on Intelligence and Security.

Upon his resignation from Parliament earlier this year Board of Deputies President Lesli Berger said “the highest praise one can be given by the Jewish community is to be regarded as a mensch – a person of honour and integrity; Mike Kelly is a mensch and a great friend to our community. After a lifetime of service to his country from the sands of Somalia to fighting Daesch in Iraq to the hallways of Canberra, he has served with distinction. He has always been a strong voice against bigotry, fearlessly standing for pluralism and harmony.

“He worked hard to achieve a balanced policy on Israel within NSW Labor, and in large measure due to his efforts, the policy adopted by NSW Labor and nationally, while far from perfect, was testament to his support and our close friends in the Labor movement. For that we are eternally grateful.”

A vocal supporter of Israel and the Jewish community in parliament, Kelly vowed to remain an ardent supporter and maintain his advocacy and involvement with the community.

The NSW Jewish Board of Deputies 75th Annual General Meeting takes place on Tuesday, 18 August at 7:00pm. To register and receive the Zoom link visit: https://bit.ly/JBDAGM2020

Learn more about our work - subscribe to our newsletter today!